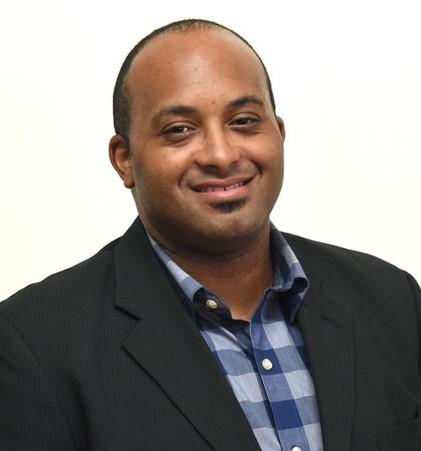 ASU Alumnus Makes It 'Big' in 'The Big Apple!'

The famous song lyrics—"If you can make it there (New York City), you can make it big anywhere"— have come true for Alabama State University alumnus, Cyril Josh Barker (Class of 2006). Barker is the first-ever digital editor of the fabled New York Amsterdam News, which is located in 'The Big Apple.’

Barker credits ASU with placing him on the road to career success in a city that is known for its workplace rigor and keen competition.

Barker, a native of Tulsa, Okla., received his Bachelor's in Communications (print media) from ASU and immediately moved to the 'Big Apple.'  He landed a full-time job with the New York Amsterdam News in 2007 as a general assignment reporter. It is acclaimed as one of the nation's oldest and continuously published African-American newspapers (110 years-old and counting), and as the leading voice of the black community in the New York metropolitan area.

"I have been with the Amsterdam News for just at 14 years and it is a dream-come-true job for me, and for anyone who is a print journalist and who wants to serve our community as an employee in what is one of the nation's most acclaimed African-American newspapers," Barker said.

"Having served as a reporter since I joined the staff at the 'News,' I am honored and excited to become its first-ever digital editor. I officially begin to serve in this new position as soon as the New Year begins in January 2022."

The Amsterdam News is an African-American legacy newspaper that is noted for its 'loyal following' each week of approximately 98,000 print readers, and its current digital offering of 100,000 individual visitors a week. Barker says the publication has more than 444,000 page views per month, and he predicts "It will grow to exceed that number shortly, as a lot more bells and whistles will soon be in place on our website for our readers."

Barker, who held several internships with news outlets in Montgomery while a student at ASU, also served as a top reporter with the Hornet Tribune. He believes students need both practical work experience, as well as good grades, if they wish to get and keep the best jobs upon graduation.

"I owe everything that I have here at the Amsterdam News to my education and the special professors who educated me at The Alabama State University. Where else can a student receive all of the special care that (ASU’s) faculty and staff nurture you with…" Barker said.

"ASU has a wonderful communication's program, great professors and leadership that have made a difference in so many student's careers, including me and my career in journalism right here in New York,'' Barker stated. "One of the finest professors who contributed the most to me was Coke Ellington, a longtime Montgomery Advertiser reporter who served as an adjunct at ASU…who taught and influenced me the most and helped me do as well as I have done."

"Thanks to Alabama State and its Communication's department for educating me and giving me the support that I needed to now reach the position of being an editor at the New York Amsterdam News."