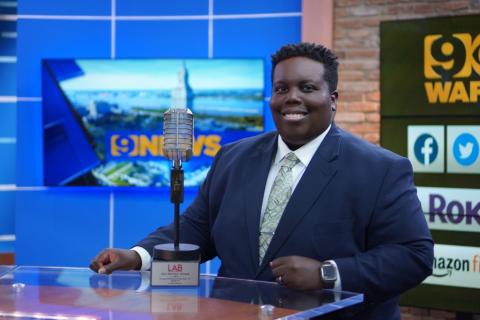 The Louisiana Association of Broadcasters named ASU alumnus Scottie Hunter its Louisiana Young Professional of the Year during its annual Prestige Awards in Baton Rouge.

“I think winning this prestigious award is incredible. Being honored in that way was fantastic because it wasn’t just for being recognized for the professional work that I do but also for my work in the community.”

For almost a decade, Hunter has been one of the faces viewers see every day when he anchors 9 News at Noon. He has been at WAFB since 2016. His career also includes stints at KPLC-TV in Lake Charles, Louisiana, at Alabama Public Television and at WTVY-TV in Dothan, Alabama.

Hunter’s love for his profession dates back to when he was a radio/TV broadcast major at ASU and worked at WVAS-FM as a student news reporter and anchor.

“I recall the first or second day I was on campus, I went to the radio station and introduced myself to Candy (Capel), the station manager, and said ‘this is what I want to do and I want to work for you. So, how can we make that happen?’ At that time, you had to be a senior looking for an internship. Candy said, ‘we should take a second look at this kid,’ and I  was hired.”

A number of Hunter’s stories have garnered national attention, including the death investigation of Lyntell Washington, a pregnant teacher whose body was found in a sugar cane field several days after she went missing in June 2016. Her killer, former assistant principal Robert Marks, was sentenced in 2021 to life in prison without the possibility of parole. Portions of Hunter’s coverage were featured on the Nancy Grace show, a popular HLN program.

Most recently, Hunter has covered the ongoing protests surrounding the officer-involved shooting death of Alton Sterling that resulted in unrest across the country and a deep conversation about race relations and police brutality.

Also, his in-depth coverage of the ambush of Baton Rouge Police Department officers that left three officers dead and two wounded, thrust Hunter into a national conversation with Bryan Williams on MSNBC.

“These stories, including my coverage of Baton Rouge’s historic flood of 2016, reinforce my passion and love for journalism,” he said.

Hunter has received several awards, including the Associated Press Award for Best Sports Reporter and the Alabama Broadcasters Award for Best News Reporter. He was nominated for an Emmy for his News Anchor/Lead Investigative reporting at WAFB, which is owned by Gray Television Inc.

“I received my Emmy nomination in 2020 for an investigative story I did about a school board member who was shopping on the phone during a heated school board meeting about changing the name of a local high school from Gen. Robert E. Lee to Liberty High School…She denied it but we pulled the public records from her laptop and we showed she was in fact shopping…  I wanted to win, but just to be nominated for an Emmy is tremendous,” Hunter said.

Hunter is dedicated to investing in the community. He works closely with the Press Club, participates in the annual Sickle Cell 5K Run and is an officer in the local chapter of his fraternity, Phi Beta Sigma Fraternity, Inc.

“I also am a court-appointed special advocate for CASA Baton Rouge. I basically speak up for children mistreated or neglected in the foster system,” he added.

Hunter said he contributes a lot of his success to Alabama State and WVAS. “The folks there let me come in and really go for it. I think that certainly set me on the path to success. I had great opportunities working at WVAS.”

Hunter said he loves his alma mater for the education and opportunities he received and for his wife, Jasmine, of seven years.

“I met my wife at ASU. We both were in communications. I owe a lot to O’ Mother Dear.''

The couple now has a three-month-old son, Jason.