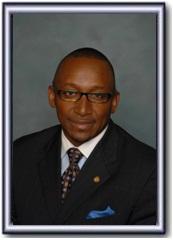 Alabama State University alumnus, State Senator Bobby Singleton (D-Greensboro), has been elected to serve as Senate Minority Leader in the Alabama legislator, a position previously held by fellow alumnus and current ASU President, Dr. Quinton T. Ross, Jr.
“I just want to thank my colleagues for having the confidence in me to be able to lead them for the next four years,” Singleton said in a quote from a senate press release. “As the minority leader we will be looking at a robust agenda; not just for the Democrats, but for the State of Alabama. Hopefully, we can work across the aisle with the majority. I look forward to working with Senate Majority Leader Sen. Greg Reed and Senate President Pro Tem Del Marsh.”

Singleton and Ross were colleagues during Ross’s 15-year tenure in the legislature.

“Of course, I am excited that my longtime friend and fellow alumnus has been elected to this prestigious position,” said Ross. “After having worked side by side with Senator Singleton over the years, I know him to be a man of the highest integrity and one who will continue to serve his constituents with distinction in this new position. He has always been a champion of his alma mater and higher education in general. ASU is grateful for his support, and I look forward to working to strengthen that support as he serves as the Senate Minority Leader.”

In a statement released after the election, Senate President Pro-Tem Del Marsh also congratulated Singleton on his election to the new position.

“There are many tough issues facing the Alabama Senate in the year to come and I look forward to working with Senator Singleton as develop legislation that improves the lives of all Alabamians,” Marsh said. “Senator Singleton and I have worked well together for several years and I have no doubt that will continue as we strive to ensure that the Senate runs smoothly and that all Senators are represented equally.