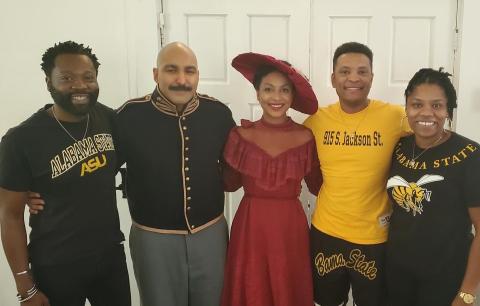 When black people were denied access to higher education due to legal segregation, HBCUs were formed to give blacks a space to grow, excel, embrace their culture and find themselves in the process.

The new TV pilot, “Rising,” written and produced by educator/writer/alumnus Dr. Sheldon C. McAfee, is a salute to those HBCU founders, especially the “Marion Nine,” the name given to the founders of his alma mater.

“The story is a result of my love for Alabama State. The story of the Marion Nine always meant something to me – nine former slaves and five teachers coming together in a basement of a church to start a school in the state of Alabama. Who does that? So, I created  ‘Rising’ because I wanted to get students excited about the history of HBCUs, to think about what tribulations and accomplishments our founders went through to get the whole program started,” McAfee emphasized.  “…I wanted a fun, uplifting, encouraging, motivational and fun TV show…where we could talk about the glory of HBCUs.”

Shot in Atlanta, the TV pilot is a drama about the founding of a Historically Black College and University in 1859. The story starts with the three freed founders meeting in a small town in southern Illinois. McAfee says the story follows the founders as they fight to build a school against the political backdrop of slavery, anti-education laws for blacks, the Fugitive Slave Act and funding, all coupled with a love triangle and the violence the founders faced to build a legacy that African Americans stand on today.

“Many of the characters’ back stories will reveal twists and turns that highlight the courage, ingenuity and determination of so many HBCU founders that helped them push through,” said McAfee, who is the author of three children’s book and a novel.

“I met them while I attended Alabama State. They are all in the industry and are great in their fields,” McAfee said.

Both Harris and McAfee pointed out the filming of the pilot is still in the making.

“For now, we shot a pitch to show to TV networks and studios to give them an idea of what we are trying to make,” McAfee said.

Specifically, Harris explained they shot nine pages of the pilot episode, which is 55 pages.  “We took two scenes and shot them, and we plan to use those two scenes as a teaser for our Crowdfunder to get money to shoot the pilot.  So, we haven’t shot the pilot, just the two pages.”

There are plans to not only pitch the teaser to networks but to streaming services as well.

"We would like to tour different HBCUs. Hopefully, we can get some talent recruited to the project as well,” McAfee added.

McAfee, a Chicago native who now lives in St. Louis,  pointed out that for hundreds of years,  Historically Black Colleges and Universities have served as dedicated environments for black students to bloom, and he hopes “Rising” capitalizes on that.

“I want the audience to be enlightened, inspired and interested, to know that we were not all cotton pickers and Sambos, but we were intellectuals, thought-provokers, rabble-rousers, and that legendary HBCUs started because we wanted that elusive gem called education.  I hope that they (viewers) want to support HBCUs and send their kids there,” McAfee emphasized.

For Harris, “Rising” shows the legacies, resilience and impact of HBCUs and how our founders rose to the occasion.

“I hope viewers see the importance of HBCUs. The importance of us, being for us and doing things for us and by us. … ‘Rising’s title says it all: We are rising to the occasion to bring forth awareness about our HBCUs. We are rising to the top because that’s where HBCUs belong, at the top.  We are rising and we are forever on a forward and upward trajectory to shine a light on our schools, our brave founders, especially the Marion Nine who had nothing at all but were willing to put the little bit that they did have to ensure that we had. These great men rose to the occasion so now the torch has been passed down and it’s time for us to rise to the occasion with ‘Rising,’ ” said Harris, a  teacher, actress, singer, director, writer and philanthropist.

McAfee and Harris both said they owe their successes to ASU.

“My time at State more than prepared me for any challenge that I have to face in life, be it as a classroom teacher, a school leader, a university professor or a creative writer. If I did not have the friendships, fellowships and scholarships that I received from ASU, I know that I would not be able to stand here today. So, to do a project to bring back notoriety to my alma mater, as well as shining the light on HBCUs, I’m ecstatic,” McAfee said.

"There are so many reasons why I love MY ASU. First and foremost, I love this place because it gave all of us a shot at obtaining a world-class college education and because of the mentoring I was privileged to receive," Harris said.