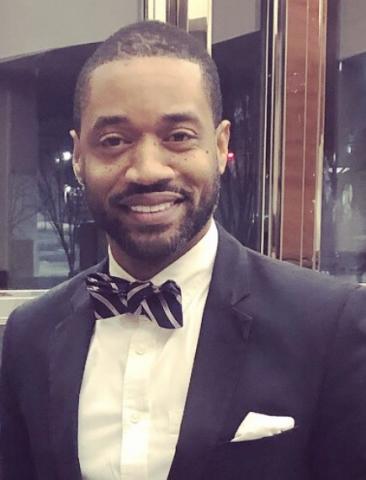 “Fruit,” an 86-page book by Alabama State University alumnus Anthony Brock, has made it to the big screen as a full-feature documentary. The sold-out premiere is Saturday, Feb. 26.

"Enthusiasm for the film has been incredible,” Brock said.

For those who couldn’t get a ticket to attend the premiere, filmmakers have teamed up with Montgomery’s WSFA-TV to broadcast the film in its entirety at 7 p.m. (CST) on Saturday, March 6.

The film is produced by Ricardo D. Bates Film, filmmaker of “The Prattville Way,” and Brock serves as its executive producer.

“Ricardo is a former student that I mentored in middle school, high school and college. I hold him in high esteem,” he said. “Ricardo is a filmmaker and an assistant principal in Texas.  He is also the co-author of ‘Fruit.’”

Brock describes the film as a timely piece that tells the story of how the power of mentoring can shift the narrative of the young black male.

“The film explores the urgency of providing positive guidance and opportunity to reimagine success for black youth while touching on their vulnerability in the face of unfavorable circumstances,” Brock said. “The book is a compilation of letters I received from my students and an insight of where I was in different stages of my career.”

As for the book title, Brock credits his wife, D’Tanja. “My wife named the book. We were discussing the impact that I had on a lot of young people, and we started bouncing around names for the book. We were in the car driving back from Atlanta, Georgia, and she said fruit. It came to her because it is a scripture in Matthew 7:16, which says ‘by their fruit you will know them.’ She has always been by my side.”

He hopes people will walk away from the film saying, “whether I do it or not on a big scale, such as opening a school or opening a mentor program, that I know I can mentor at least one young person…everybody can do something. Everybody’s little adds up to a lot.”

The Montgomery native is the principal of Valiant Cross Academy, a private all-male school he co-founded with his brother, former NFL player Fred Brock, in 2015. With​ two​ campuses in the heart of downtown​,​ this fully accredited private school puts a strong focus on developing character through rigorous academic lessons, discipline and leadership training for its middle and high school-aged students.

“The school is featured in the documentary. It tells the story of Valiant Cross and how we got started. It highlights some of the programs we have.  Other nonprofit programs in the Montgomery area for young people are highlighted as well. The film details my career as an educator and mentor,” he said.The school has been showcased in local print publications,  on local tv stations (WSFA and WAKA) ​and​ recognized by USA Today. Valiant Cross received the 2017 Community Service Award from Phi Beta Sigma Fraternity Inc. and was selected as one of the State of Alabama’s Bicentennial School’s. Brock and his scholars from VCA were highlighted recently in Bryan Stevenson’s HBO documentary, “True Justice,” and CNN News has done a feature on the school.

Brock said during his educational journey, he has been a teacher, coach, assistant principal and principal. He was the last principal at the historic St. Jude Educational Institute in Montgomery.

“God has truly blessed me with the opportunity to help shape the minds of the future generation. Throughout the years, there have been countless opportunities to learn just as much from them as they have from me. With that being said, I consider my current and former students, my Fruit,” Brock stressed.

An active and dedicated community servant, Brock has received numerous awards and has helped to establish and advance initiatives such as the Brother2Brother and Sister2Sister mentoring programs.

Since 1999, Brock said he has committed his life to mentoring and educating young people.

“My brother and I were so blessed to grow up with a great father, a retired Montgomery Public School (MPS) principal, and a great mom, a retired MPS teacher. It’s a calling in my life to work with young men, especially African-American males.  I can say unapologetically that I’m walking in my purpose.”

Brock, a member of Alabama State University’s “50 Under 50” inaugural alumni class, said throughout his successes, he found inspiration from his alma mater.