Alumna's Schooling @ ASU is Allowing Her to Work on NASA's International Space Station! 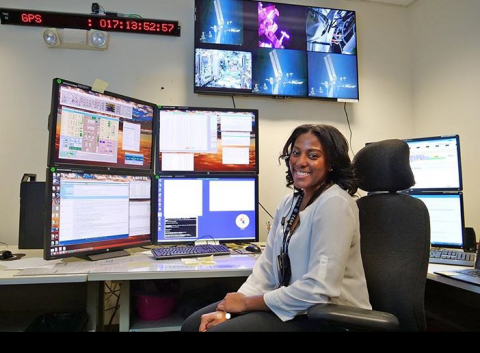 An alumna from Alabama State University who is now working with NASA as a Teledyne Brown Engineering (TDE) employee.has her career set to go "to the moon and beyond."

Kaila Myrick (ASU class of 2015) is the first student from ASU and only the second NASA flight controller to obtain the special Microgravity Science Glovebox Facility Operator (MSG) certification from NASA. She is the first ASU graduate certified by NASA as an MSG operator, which is due to a mentor-prote'ge' agreement (MPA) between the University and TDE.

This allows her to work on NASA's International Space Station (ISS) in a big-way.

Myrick's success is due to her scholarly abilities and to an ASU/Teledyne Brown MPA agreement that began on July 27, 2015, in which she participated. The agreement allows the University and its students in the program to receive assistance and training for work with NASA and its International Space Station (ISS), which is part of a NASA contract with TDE.

ASU PREPARED ME WELL FOR SUCCESS
Myrick said that Alabama State University helped prepare her in a myriad of ways for her job with NASA and Teledyne Brown.

"Through all of my four years at Alabama State University, I was guided and taught by many awesome professors who helped me understand STEM (science, technology, engineering & math)," Myrick said. "From physics, math, and to my computer science courses, all of my professors helped build my knowledge and understanding of science.  Much of what I learned as a student at ASU, has played an important part with some of my everyday tasks, which I perform here at NASA," she added.

She said that all of the long hours she spent in ASU's science lab, library, and math lab helped to cultivate her into being disciplined towards her schooling and staying focused on attaining the knowledge, which has helped with her tremendous career growth with Teledyne Brown Engineering.

"Also, having such a great dean and advisor such as Dr. Wekesa  and Dr. Pettis, helped make sure that I was on the right track for graduation and future success. Working in the College of Business Administration as a computer lab assistant, also allowed me to see what pure professionalism is and how it can take you a long way," Myrick stated.

BEGINS WORK WITH NASA AS AN ASU STUDENT
ASU's Myrick began working on the TDE contract with NASA while still a student under a co-op agreement. Upon her graduation from ASU in the fall of 2015, she was hired to a full-time position in its Space Launch System support team and grew in her responsibilities at other NASA Centers until she was advanced to its MSG team.

According to Teledyne Brown officials, she has spent the past six months training in the International Space Station's ground system  to obtain her certification as an MSG facility operator.

"Her efforts are commendable and we are pleased to have her on our team,”stated David Provancha, Teledyne Brown Engineering's Mission Operations and Integration program manager.

Teledyne Brown officials stated that the certification that Myrick has received from NASA, allows her to have real-time command and control support for the Microgravity Science Glovebox facility and to provide it with problem recognition and resolution, console support, and many more technical skills.

NASA CAREER PATH...TELEDYNE BROWN ENGINEERING & ASU
Myrick said that "thanks' to the mentor-protégé agreement  between Teledyne Brown Engineering and ASU, she had a clear and concise career path to work today with NASA.

"I have seen so many ways my major can be stretched and put into an important use here at NASA, thanks to my managers and co-workers at Teledyne Brown," she said. "I was brought into a great opportunity here, where I have been mentored by many great Teledyne Brown employees and also with ASU alumni in Huntsville," Myrick said. "The training that I have received by my employer has helped prepare me for my NASA certification...and being in such a great work force with so many brilliant minds has also helped open me up to many resources and tools that have helped build and shape my career path with Teledyne Brown Engineering."

ASU STUDENT ORIENTATION HELPS HER WITH THE SPACE STATION PROJECT
Myrick stated that not only has her education at ASU prepared her with a foundation of knowledge to work on TDE's NASA projects, but so did her extracurricular activities at the University.

"Being part of ASU's Student Orientation Service allowed me to gain leadership, dedication, and serving skills...which has helped me both working with the Huntsville community and with my work at Teledyne Brown and NASA, which all started at Alabama State University," Myrick said.