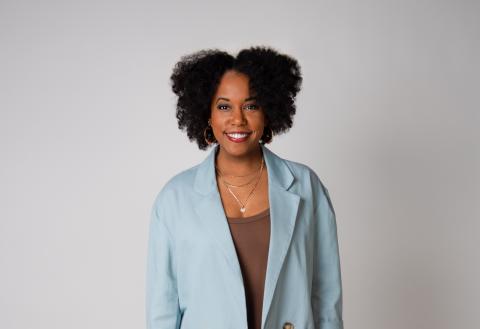 “Everything that I’ve done, all of my experiences have led me to this moment,”  said Handy. “This is an exciting time for the industry and I’m thrilled to be a part of some of its historical changes.”

Handy noted that directing a CSC show this spring, “Ma Rainey’s Black Bottom,” is quite significant.

“The company has been around for 26 years and … in 2021, there is finally a black woman directing a play here,” she said.

In her new leadership role, Handy will educate more than 50,000 students annually through performances and workshops about Shakespeare, the Classics, drama, and more. Her goal is to diversify and expand CSC’s reach to more students and youth organizations in Cincinnati.

“My focus is to really diversify all of our education programs to give young people an opportunity to explore something that they are not necessarily getting in school,” explained Handy.

Before accepting her leadership position at CSC, Handy founded the Cincinnati Black Theatre Artist Collective, where she remains the Artistic Director.

“The theatre is a space for black theatre artists in our region to share work that speaks directly to black experience,” said  Handy.  “Right now, it’s a virtual company due to COVID.”

A Birmingham native, Handy has been a teaching artist and theatre educator for the past eight years for Cincinnati Playhouse in the Park, where she completed the Bruce E. Coyle Acting Internship.

Wearing her acting hat,  some of her favorite roles on CSC’s mainstage include Fannie Lou Hammer/Coretta Scott King (“All the Way”), Malcolm (“Macbeth”) and Bianca (“Othello”). Handy, who is a member of Actors Equity Association, also has played on regional stages, including Cincinnati Playhouse in the Park (“A Christmas Carol”), The Human Race Theatre (“The Cake”), Theatre at Monmouth (“Pirates of Penzance”), Island Shakespeare Festival (“A Winter’s Tale,” “A Midsummer Night’s Dream”), and Notre Dame Shakespeare Festival (“Pericles, The Tempest”).

“I’m mostly a regional circuit actor…I’ve learned you don’t have to be in a major city to have a career (in acting),” she said.

Handy received her Bachelor of Arts and Sciences from Alabama State University and her Master of Fine Arts in Theatre Performance, with a focus in the African-American theatre experience, from the University of Louisville. She also is a graduate of The American Musical Dramatic Academy in New York.