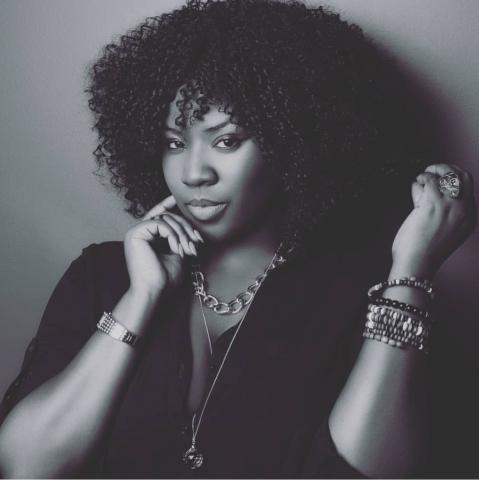 Entrepreneur and Alabama State University alumna Jacelyn Penée Rainere Johnson, who is making strides in the movie and modeling industries, has launched a fashion line.

“What started out as a way for me to promote my (coffee table) book of quotes is now an official clothing brand,” Johnson said.

The self-taught designer used a generous dose of creativity, a pinch of business savvy and a lot of passion and drive to launch PowerTeeQuotes (PTQ), an online store that features T-shirts with trendy and grunge graphic designs from sayings from her coffee table book of quotes. She said her goal was to create designs that were not typically found in stores.

“Whenever you wear my clothes, I want you to feel like the coolest person in the room. Everybody can find a T-shirt with a catch phrase that they can relate to,” Johnson said.

The PTQ clothing line features inner-thought quotes on apparel ranging from T-shirt’s, crop tops, sweaters, jogging pants, sweatsuits and Home Style Collectibles.  Customers can purchase inspirational graphic T-shirts to T-shirts that are a little more ​candid​. They retail between $25 to $45.

“The brand is for anyone over 21 because the majority of quotes are for a mature audience,” she said. “Each topic stands under an umbrella of PTQ: ‘We Say What You Won’t.’”

“When you do something that you actually like and wake up with a passion to pursue it along with a flexible plan, that’s when you’ll be successful. Once I figured that out, it all clicked for me. I have a lot of passion and conviction in the power of good clothing. You must have a passion for fashion. Passion is the key,” Johnson remarked.

Aside from her fashion world, the Michigan native is a screenwriter. She is now working on three pilot scripts for digital streaming and TV.

“I hope to pitch the scripts to HBO and other streaming markets. So far, I have good feedback from a couple of producers and directors on two projects that they can relate to,” she said.

Johnson said her goal is to bring back family-oriented movies to show the connectivity within our African-American families. “The one thing I like to focus on when I’m creating is writing stories full of hope, to give people a way out of traumatic situations,” she said.

Wearing the actress hat, Johnson was the lead actress in "Happily Married After," circulating the National Film Festival Circuit since 2020.  She won "Best Comedic Actress Award" for her leading role as Laci Spark. Her other films include "New Afrikan," “Okechukwu," “NBA,” and "Coming Together.”

Johnson is also a model for Target. “I’m Target’s brand ambassador for Room Essentials. You can find me in the Bathroom Decor Section in Target Stores nationwide, on the Room Essentials Shower and Head Wrap. I was featured in other Target campaigns as well.”

The Spark Started at ASU

While at ASU, the Theatre Arts graduate (’04) was a Dramatic Guild member, head coordinator of Eclectic Dance Company and model and choreographer/creative director of Elite Models.

“I helped change the way runway shows were done at ASU. We made the runway shows more of a performance number. The models performed with dancers. I took that as a stepping stone to what was next. And what approached me next is that I returned to Minnesota and started coordinating statewide fashion shows. I was also called upon by actor Vivica A. Fox’s magazine, JOLIE Magazine. The fashion show coordinator asked me to choreograph the fashion show in Minneapolis.”

It didn’t end there. She was a plus-size model for Evolution of Curves in Los Angeles, an instructor at John Casablancas in Minnesota and became Agency Director of Model and Talent Management Agency in Minneapolis.

“I also coordinated and choreographed the​ Cald​​ to Art, Black Panther Naked Art Fashion Show in 2018, right here in Minneapolis,” she added.

She credits ASU for where she is today.

“I love O’ Mother Dear. There isn’t a year that goes by where I’m not back at State. I’m filled with so much love and gratitude. State has taught me resilience. My alma mater is my family. My father went to State, my sister was Second Attendant to Miss ASU (’01) and my aunt and uncles also went to State. My father, sister and I have been recruiting students to Alabama State for decades.  ASU has not only taught us resilience and the family factor, but about our culture and the rich history of Alabama State.  ASU has played a big part in my life,” she exclaimed.

Johnson said because of their unwavering love for ASU, she, her father and sister created a scholarship last year for majors in music, business and theatre.

“Once they graduate from the Theatre Arts, Music or Business departments, we have a hub for them that can assist them with their next steps in their careers.  ASU...is family to us; it’s in the blood and will always be,” she emphasized.

To purchase Johnson’s T-shirts and other apparel in her clothing line, visit PowerTeeQuotes.com.