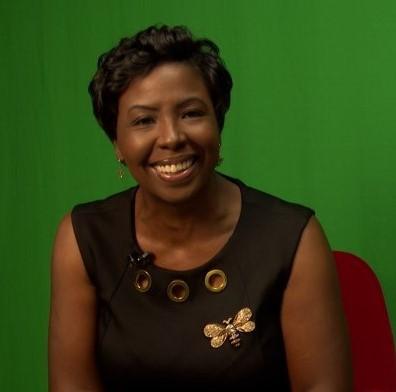 An Alabama State University alumna (Class of 2001), who majored in communications, started in the television industry as a low-level, behind-the-scenes production assistant. Today, that assistant is the new owner of a television station, which is a step few dare to take in this highly competitive industry.

April Ross is the proud owner of WJCN TV-33, a LaGrange, Georgia, television station she purchased in May 2021. WJCN is available on-the-air through Spectrum, 24 hours a day, throughout 600,000 households and seen in 11 counties in both West Georgia and East Alabama.

"What is ironic is when I was a student at Alabama State University, I actually interned at WJCN and now, I own it," Ross said with a giggle.

She explained that her goal is to transition her new television station to become akin to a major network affiliate in the area.

"I want to create something in this television market that has never occurred before and that includes creating and producing great local programming for our community that’s full of home-area content; to use this platform to provide our residents with what best suits their community needs, tastes, standards and interests, and do it while hiring and honing local talent into our TV on-air personalities," Ross added.

IT'S ALL LOCAL FOR BEE-TV

Ross calls her parent company the "Bee-TV Network" and said when she was in the LaGrange area transitioning from being a reporter with Columbus, Georgia's venerable CBS affiliate WRBL News-3 to pursuing private business ventures in 2017, a deputy sheriff was shot in the area. Ross and others realized that there was no reporter to cover the breaking story. So, she covered it, via live social media.

"My news reporter instincts took over and in the absence of any TV news outlets here to report on it, I covered it on Facebook Live, which helped my social media presence to grow in excess of 15,000 followers. This was the catalyst for Bee-TV and ultimately contributed to my purchase of WJCN TV-33," Ross stated.

She explained that once her new television station is firmly entrenched and viewed in the local market, she will back off delivering breaking news on her Facebook page so her followers will instead obtain their news from her television station.

GOD, ASU & A COLUMBUS TV PERSONALITY ARE PATHS TO HER SUCCESS

Ross is a devout Christian who acknowledges that all she has obtained in her life, including the purchase of TV-33, comes from God.

She also credits Alabama State University and the long-serving anchor of Columbus' WRBL TV-3 with contributing to God's plan.

"I give God the ultimate credit for any and everything in my life. Period. And aiding his plan for me has been Alabama State University and CBS-3's Teresa Whitaker," said Ross.

Whitaker, who has been with the Columbus television station for 37 years and is its main anchor, acknowledged she noticed Ross early on when Ross was working behind the cameras in the control room.

"I saw her star quality early. She shined. So, in my spare time, I began schooling her on how to write news stories, edit them, dress the part and present news in such a manner as to both state the facts and present it in a way that would be of interest to our viewers. She was a quick student, and the rest is history," Whitaker stated.

Ross explained that she also owes a large part of her lifelong success to O' Mother Dear (ASU).

"I learned so much from the University's Communications Department and owe it and Professor ‘O’ a lot for who I am and where I am today," said Ross. “ASU was where I first filmed news stories on camera, learned to splice film on a tape, to have a good voice on-air, which I know occurred after being a weekend anchor at ASU's WVAS 90.7 Radio.”

"At ASU, I learned discipline, improved my on-air presence due to what I was taught in the University's communication and speech classes; was taught both the basics and advanced principles in communications by an array of gifted faculty; and was taught to set goals and obtain them. My advice to present students is that you must first work hard, learn well and work through the hard times, if you wish to obtain your dreams," Ross stated.

To support and/or send her well wishes, you may email April Ross at april@beetvnetwork.com.