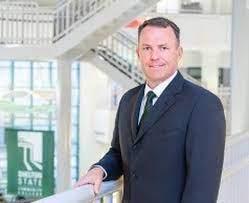 An alumnus of Alabama State University is the newly selected president of Tuscaloosa's Shelton State Community College (Shelton State), a two-year community college that is among the largest of its kind in the state with more than 7,000 students. Shelton State's new president is Dr. Chris Cox, a native of Geneva, Ala., and a graduate of ASU who obtained a Master of Science degree in Educational Administration from the University.

"I am overjoyed and humbled to be selected for one of the highest honors that I can imagine in education, which is being the president of Shelton State Community College," Cox said by phone.

"While Shelton State means a lot to me, Alabama State is also still near and dear to my heart and always will be," said the veteran educator. "There is something very special about ASU, its loyal Hornet Nation family, great faculty and certainly its beautiful and historic campus. Even though it was years ago when I was studying for my master's degree at ASU, I can still hear the rhythmic beat of the drums and the fanfare of the brass section as the Mighty Marching Hornets band practiced in the early evening hours - gosh, it was beautiful."

Cox was appointed to the presidency of Shelton State unanimously by the Alabama Community College System (ACCS) Board of Trustees and assumed his new role on June 8, after having served as the college’s interim president since February. He has nearly three decades of both higher education and K-12 expertise, having served in such positions as the special assistant to the ACCS chancellor, interim president at Northwest-Shoals Community College and other high-level positions at various community colleges and high schools throughout the state.

STILL A HORNET AT HEART

President Cox was asked about his time studying at ASU.

"I have nothing but fond memories of my education at Alabama State University. It is truly one of the great and historic institutions of higher education. ASU and my degree from it gave me the opportunity to get very involved in the administrative side of education, which is the path that led me to become the president of Shelton State," Cox said.

"I am and always will be an ASU Hornet. I believe in what its mission is, in how it elevates its students into educated and successful citizens, which makes me proud to say that I am a Hornet, too," Cox explained.