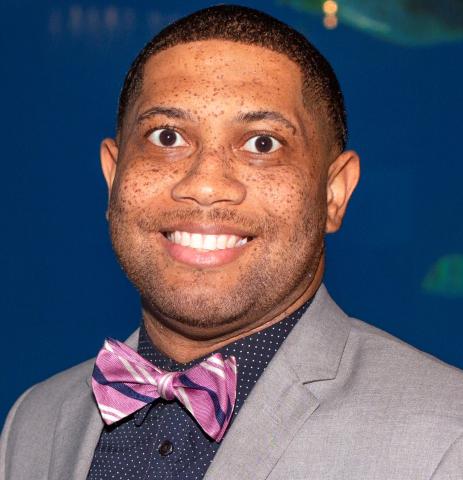 ASU alumnus Bailey Dawson, Jr. (class of 2008) had always wanted to be a teacher, but never in his wildest dreams did he believe his classroom would be water-bound and filled with such exotic marine life as zebra sharks, sea lions and beluga whales.

But that is par for the course for Dawson, who is the senior manager of Educational Opportunities and Programs at the world-acclaimed Georgia Aquarium in Atlanta. Since 2019, Dawson has made a “big splash,” overseeing a staff of 10 who work with students and educators promoting the venue and its exotic marine life, and a variety of programs to safeguard and perpetuate the Earth's numerous bodies of water, marine fish and mammals.

"This is a dream come true career for me, as I oversee all educational activities at the Aquarium, which is so unique, fun and intellectually stimulating for children or adults. There is so much to see and learn here at the Aquarium, which highlights marine life from the world's last great frontiers, which are its oceans and seas," Dawson said by phone.

In addition to serving as the top educational promoter for the Aquarium under its executive leadership, Dawson also is charged with developing curriculum, writing and obtaining grants, overseeing professional development opportunities for teachers, working to create and sustain community partnerships, and serving as the liaison with other aquariums and similar facilities.

ASU HELPED MAKE IT ALL HAPPEN FOR DAWSON

Dawson claims both Montgomery and Selma as his hometowns and said he was “reared" on the campus of Alabama State University.

Both of his parents are alumni of ASU - Bailey Dawson, Sr. and Shirley Pettway Dawson, who reside in Selma. His father served as assistant band director for the Mighty Marching Hornets Band under ASU's famous band leader, Dr. Thomas E. Lyle. Bailey Dawson, Jr., also was a band member and played the trumpet under the tutelage of another acclaimed ASU band maestro, Dr. James Oliver.

"The Alabama State University was where I was reared as a child in its band practice room at Tullibody Hall, and where I later enrolled as a student, graduating with a major in Health Education," Dawson stated. "Not only did I receive a world-class education at ASU that has kept me well employed and happy over the years, but it opened my eyes, ears and mind to have an interest in all things educational, which made me a natural to be a teacher and share those observations with my students. I have always had a love for education and taught for several years in the Atlanta area school system; however, while teaching in Marietta, Ga., it was fate that caused me to be introduced to the director of the Georgia Aquarium and the rest is history."

NEVER VISITED AN AQUARIUM IN HIS YOUTH

Dawson, who began work at the downtown Atlanta attraction in 2019, explained that he never grows tired of the amazing exhibits at the world-class facility.

“In my youth, we never visited an aquarium, which I regret; and until my education at ASU, I wasn't aware of the many opportunities that existed outside of a formal classroom setting, which we now call informal education. We utilize this concept at the Georgia Aquarium to educate people in so many different ways, which makes education both fun and fulfilling,” Dawson said.

Under Dawson's leadership, the Aquarium is now numbered among the world’s few "STEM-certified" aquariums. The venue has added teaching facilities that utilize interactive technology, including microscopes, interactive boards and underwater drones.

Dawson said in addition to receiving a great educational foundation as an undergraduate student at Alabama State University, he has since garnered important lessons and expertise in leadership and development from the Aquarium's Dr. Brian Davis (president and CEO), as well as Dr. Al Dove (vice president of Science and Education).

"These two men have inspired me with their knowledge, dedication and care about our facility and concern [about] its outreach to the public, which makes us all better employees and more dedicated educators," said Dawson.

While Dawson has many accomplishments to his credit for his work with the Aquarium, he points to one thing as the highlight of his position.

"Of all I do, say and see on behalf of the Georgia Aquarium, my favorite and most fulfilling role within our educational outreach is when I see the look of amazement and joy on students’ faces when they witness the grandeur of the Earth's marine life."