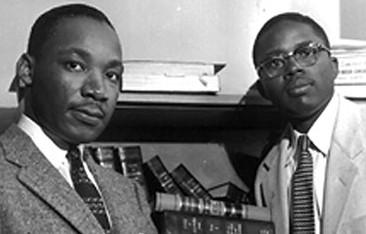 One of Alabama State University’s notable figures has released a new book that is already receiving national acclaim and accolades. Alumnus Fred Gray (1951) has written a new book with two co-authors titled “Alabama v. King,” which was released on May 24.

The 384-page hard cover book published by Hanover Square Press was written by Gray with co-authors Dan Abrams and David Fisher. It centers on the pivotal 1956 case "Alabama v. King" that was the criminal trial defended by Gray that was filed by segregationist government prosecutors against Dr. Martin Luther King, Jr. (MLK) and 88 other black Montgomery, Ala. residents, including ASU faculty member and Bus Boycott organizer, Jo Ann Robinson. The case was an attempt to thwart the then on-going and historic Montgomery Bus Boycott, which was precipitated by the arrest of Rosa Parks after she refused to give up her seat on a segregated city bus. Historians have labeled her arrest and the subsequent boycott as the seminal birth of America's modern Civil Rights Movement.

"It was the greatest privilege of my longstanding legal career to work alongside and represent Dr. King in Alabama v. King; as well as in various other important desegregation cases filed by me from Alabama courtrooms all the way to the United States Supreme Court for Dr. King and a host of other brave men and women who stood-up at great peril of their lives and property for equality and justice for all," said Gray, a 91 year-old practicing attorney.

In the newly released book, ASU alumnus Gray and his co-authors give readers a behind-the-scenes glimpse into many incredible historical moments, and antics, including the time that Gray was with King when King received a bomb threat from the Ku Klux Klan that threatened to destroy his home on South Hall Street in Montgomery (that later happened). The book also details Gray’s firsthand account of racist threats by Jim Crow lawyers and judges, and courtroom testimony that shocked the civilized world, as well as nuggets of the strategy and courtroom leadership that ultimately helped Gray emerge victorious in his defense of the 88 Montgomery Bus Boycott defendants, thereby securing his place in the annuals of legal legend.

In Alabama v. King, Gray also shares both legal and personal facts about the great figures of the Movement.

"This book naturally gives readers a close-up look into this important case, which if it had failed, might have set back the Civil Rights Movement for many years," Gray stated by phone from New York City, where he was being interviewed by national media outlets such as Good Morning America on the ABC network.

"However, the book also shares my up-close impressions and anecdotes of Martin King who was such a truly nice person. He was a for-real nice man with a radiant smile, a man who had a rather remarkable sense of humor and hearty laugh, a man who never acted like a big-shot nor did he ever try to monopolize conversations or remind folks of his importance in the struggle. He was a great and patient listener which is rare for a natural leader of his magnitude, and he enjoyed trying to make me - a rather serious young lawyer and Church of Christ preacher - laugh and be at ease during some of the most tumultuous times of our nation's racial history of change in the 20th century."

The importance of Gray’s legal cases both before and after Alabama v. King are among the most important adjudications in the history of America's modern civil rights struggles.

He first came to national prominence representing Rosa Parks after she was arrested for refusing to give up her seat to a white man and move to the back of a segregated Montgomery City Bus. That case caused him to work with ASU faculty member Jo Ann Robinson, Dr. King, ASU Coach Rufus Lewis and E. D. Nixon in organizing the successful Montgomery Bus Boycott (1955 – 1956). He also was the lead attorney in Dixon v. Alabama (1961) that established due process rights for ASU and other students at public universities; Gomillion v. Lightfoot (1962), a case that laid the foundation for "one man, one vote;" and Williams v. Wallace (1965) that allowed the Selma to Montgomery March to take place, paving the way for the 1965 U.S. Voting Rights Act.

Gray also successfully represented Vivian Malone and James Hood in their legal case to integrate the University of Alabama despite Governor George Wallace's infamous 'Stand in the Schoolhouse Door' incident. He filed similar successful cases against both the University of North Alabama and Auburn University.

In all, the lawsuits filed by Gray helped desegregate more than 100 local school systems, as well as all public colleges and universities in Alabama. He also led the Tuskegee Syphilis Experiments case, which caused President Bill Clinton to apologize to Gray's plaintiff's in the East Room of the White House on behalf of the United States government for the decades of nefarious medical experimentation that the victims (all black citizens) suffered.

The book Alabama v. King captures one of the most important moments in the early legal cases for equality, as seen from Attorney Gray's perspective.
Dr. King once described Gray as "The brilliant young leader who later became the chief counsel for the protest movement."
Gray gives credit for his interest and involvement in civil rights legal issues to attending Alabama State University and to the lectures and personal mentorship of ASU political science professor, Dr. J.E. Pierce.

"Professor Pierce held special sway over many Alabama State students who took classes from him and that he mentored in the late 1940s and through the 1950s, which included me and two other members of the ASU class of 1951: F. D. Reese, who became the leader of the Selma movement and Fred Shuttlesworth, the leader of Birmingham's protest organization - both of whom are acknowledged by historians as important leaders in the Civil Rights Movement," Gray said.

Gray explained "Professor Pierce explained to us that we had to invest our God-given resources and activity back into our community to make sure that all black people had the same rights, protections, privileges and equal justice that any white citizen had in the nation. He said that was why the Allies in World War II fought and defeated Nazi Germany and the other fascists in Japan and Italy."

"So an ASU professor lit a fire in me that still burns brightly to this day that made my life’s goal to destroy all things segregated, which I have been reasonably successful in accomplishing," Gray explained.

ABOUT THE THREE CO-AUTHORS

Dan Abrams is the chief legal affairs anchor for ABC News and CEO and founder of Abrams Media. He is also the host of the top-rated “Live PD” on the A&E Network and host of “The Dan Abrams Show.”
David Fisher is the author of more than 20 New York Times bestsellers.

Fred D. Gray is one of the nation’s leading civil rights attorneys and still practices law into his 90's. He was the lawyer for Rosa Parks, Martin Luther King Jr., Jo Ann Robinson, E.D. Nixon, Ralph Abernathy, the Tuskegee Syphilis Experiment plaintiffs, and the Montgomery Bus Boycott leaders, which began the modern Civil Rights Movement. His other legal cases and clients are a “who's-who” of modern legal history that includes the 1960 Alabama Lunch Counter Protest Movement participants, the 1961 Freedom Riders, the 1965 Selma to Montgomery March plaintiffs, civil rights leaders John Lewis and Hosea Williams, and numerous school desegregation and voting rights lawsuits. He resides in Tuskegee, Alabama, and practices law out of offices in both Tuskegee and Montgomery.
Purchase the book: Alabama v King is available for purchase in most local book retailers, and at Amazon and numerous other online locations.