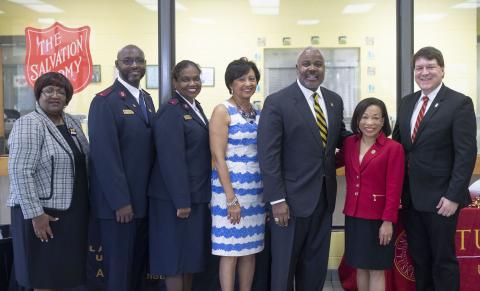 College rivalries Alabama State University and Tuskegee University are extending their spirit of competitiveness from the football field to the community in an effort to benefit one of the area’s most impactful charities, the Salvation Army.

The LDC Block Party also is a kickoff event for the third annual Labor Day Classic football game between the Hornets and the Golden Tigers.

“We are inviting everyone in the community and all over to come and participate with us as we get ready for the Labor Day Classic game on Sept. 7 and our block party on Sept. 3 behind the ASU Stadium,” Ross said.

Commitment to community and creating new opportunities led Alabama State University and Tuskegee University to partner with the Salvation Army.

“At Alabama State University we call that commitment CommUniversity,” Ross said.   “We are here today to support an organization that is known for its charity in providing for so many individuals in both the Montgomery and Tuskegee communities.”

“The Salvation Army is a highly regarded social services organization that has a long tradition of providing compassionate care in the local community,” McNair said. “That’s why our university wants to be part of this endeavor. The Salvation Army not only impacts the community through its emergency crisis program and the day-to-day crisis that affects families, but through ongoing programs that help families get back on their feet.  We are very much in support of helping this organization.”

The highlight of the pre-game showdown is the “fill the bins” competition between the two universities. The competition challenges ASU and Tuskegee fans to fill Salvation Army bins with donated goods of clothing and toiletries, which will benefit Montgomery and Tuskegee communities. The bins will be marked Alabama State University or Tuskegee University.

Despite their common charitable goals, the Ross and McNair participated in a moment of friendly rivalry as each predicted victory in the off-the-field competition. The prize -- bragging rights.

“Just like the game on that Saturday, we’re expecting a Hornet victory in this contest, too,” Ross said smiling.

An amused McNair said Tuskegee will walk away with the win.

“The rivalry aspect is what makes this event so much fun and really gets people involved,” McNair said.

Over the last few years, ASU and Tuskegee have renewed their longstanding rivalry through the Labor Day Classic. This year, the game is expected to draw more than 30,000 fans from all over the world.

Ross said aside from the competition, the Block Party will include food trucks, carnival-styled games, a DJ and prizes. A number of other exciting events will happen during Labor Day Classic Week, including the Nat King Cole Society Jazz Festival, the President’s Gala and the Labor Day Classic Concert.

Lt. Bryan Farrington, administrative director of Salvation Army, said the organization is proud to partner with Alabama State University and Tuskegee University because the institutions support its mission to meet human need without discrimination.

“On behalf of my wife, me and The Montgomery River Region Salvation Army, we feel honored to be benefactors of such a long-lasting history of rich competition and fellowship as we go in service into our community,” Farrington said.  “This partnership makes an immense difference in the level of care we are able to provide in the community. Thank you for partnering with us and the services you provide for the community.”

Both presidents kicked off the competition by donating five items each.

“Dr. McNair and I challenge our board of trustees, faculty, staff, student body, alumni and the communities at large to make this one of the biggest competitions to support our community,” Ross said.

McNair and Ross agreed that respect is at the core of this rivalry.

“It’s important to remember that no matter which school collects the most donations, at the end of the day, no one is going to feel bad about giving away that much collected goods to the needy in our communities,” Ross said.