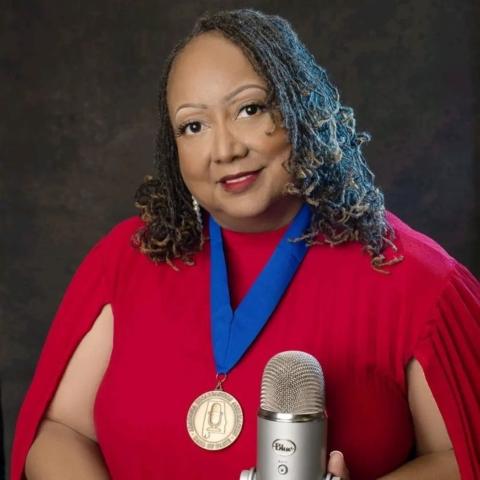 Deborah Pearson’s love of radio, news and her community are reasons she was selected to be one of the newest members of the Alabama Broadcasters Association (ABA) Hall of Fame. The veteran broadcaster is a proud ASU alumna who currently serves as a longtime news anchor/reporter for WOOF-FM in Dothan, Ala.

Pearson’s love for her profession dates back to when she was a Broadcast Journalism major at ASU and worked at WVAS-FM as a student news reporter, entertainment reporter and community affairs coordinator.

“It’s finally sinking in. I was one of five to receive the honor. This ABA induction validates all of my hard work over the years,” she said.

Because of COVID-19, Pearson didn’t receive the same fanfare as other Hall of Fame class members, but she said receiving the recognition remains a shining moment.

“I didn’t get the big hoopla, but we did do a Zoom acceptance speech that was sent to all the ABA organizations. I also celebrated by getting a photoshoot done,” laughed Pearson.

For three decades, Pearson has been one of the voices listeners have heard on the radio. She’s been at WOOF since 1992.  Her career includes stints in TV and radio. “I was the first black female to have a 30-minute talk show at WDHN (Dothan television station) in 1995,” she said.

One of the most memorable moments in her career was October 31, 1995.

“I received a call that there was a car accident. I went to cover it.  I traveled to Highway 84. When I got to the scene, there was a large line of traffic. So, I drove on the grass because I didn’t know what was going on. And when I got on the scene and I looked to the side and I recognized my father’s truck. It was my father in a car accident. He didn’t survive,” Pearson said. “I’m thankful that I spent time with him earlier that morning. I spent the last day of his life with him….a special moment. That day will be etched in my mind forever.”

A case in 2013 also was memorable. “It was the boy in the bunker that was covered nationally. That was a seven-day coverage — the longest story that I covered back-to-back continuously.”

The story involved a Vietnam War veteran killing a school bus driver in Midland City, Ala. and kidnapping a 5-year-old boy. The boy was kept in the killer’s underground bunker for nearly a week until the FBI Crisis Team rescued him and killed the kidnapper.

Being a woman, particularly a woman of color,  presented extra challenges for Pearson to overcome in her career.

“I did face some adversities when I first came to WOOF in the early nineties,” she explains. “Working for a station that is predominately white, you don’t expect to hear an African-American woman. When you’re on the radio, people don't see what you look like; so, they automatically assumed I was Caucasian and then they’d be surprised when I started going to community events and press conferences. That’s part of the mystery of radio, and I love it.”

Pearson has won numerous professional awards, including being named “Best News Anchor” and “Best Reporter” in Alabama by the Alabama Associated Press in 2019. Her many community awards include receiving the Torch of Light Award from the Dothan Alumnae Chapter of Delta Sigma Theta Sorority, Incorporated and the Community Service Award from the Dothan Alumni Chapter of Kappa Alpha Psi Fraternity. She has held office on numerous boards, including serving as President of The Alabama Associated Press Broadcasters Association.

Her time at ASU, she said, helped propel her to where she is now.

“I lived at the radio station. That was my home. I worked under Candy Capel, Mel Marshal, Rob Taylor, Steve Myers, Michael Crenshaw and Jackie Kennedy Amis, to name a few. Michael taught me production and how to edit. My editing skills came from him and Mel. I never would have learned the skills that I know now without ASU. Even though things have changed so much…I knew the basics from them as far as reporting skills and how to edit, all of that stuff I learned from ASU. And when I got to WOOF those skills became even better working with a top-notch journalist, John Daniel, my boss and co-worker. WVAS springboarded my career,” Pearson said.

“My word to young journalists is to have integrity, to be trustworthy in what you do and give quality reporting. Those are the main things that worked for me over the years. Those qualities will never die,” Pearson emphasized. “You have to take the initiative to be better and not depend so much on others. That’s why I stayed at WVAS — to learn…You have to have that drive.”