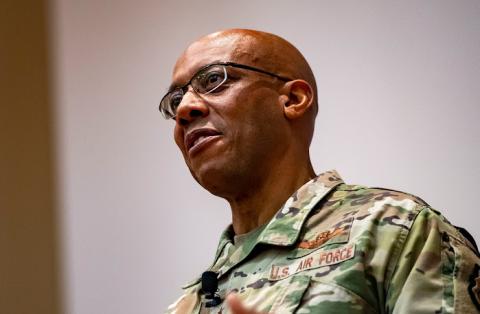 The four-star general, who is a graduate of the ROTC program at Texas Tech University, spoke to nearly 50 cadets and cadre at the Ralph David Abernathy Hall auditorium. He discussed the five tenets he has followed in his career: “fail-to-succeed,” “challenge the status quo,” “trust but verify,” “have attitude,” and “define success.”

“Whatever I do, I always put my best foot forward.  The measure of a leader is being able to adapt and where he stands in times of conflict…it’s important to be able to lead through complex challenges,” Brown said.  “We all will have some challenges and sometimes we have to fail in order to achieve. Some of your failures or some of your challenges are some of the things that will motivate you to take the next step, to come back and fight again and put more energy behind whatever you are trying to achieve. So, don’t get down because you had a bad day or something didn’t work out, it’s how do you bounce back from that.”

Brown advised the cadets to develop themselves to help accelerate change by “challenging the status quo and asking ‘why’.”

“When you challenge the status quo…don’t let the first ‘no’ stop you…particularly if it’s something you are very passionate about and know it’s the right thing to do. Go through all five stages of no — hell no, no, we’ll think about it, not a bad idea, we should be doing it already. You may have to go through a couple of stages more than once...but if it’s something you truly believe in, go through the stages.”

Brown emphasized that attitude plays an important part in succeeding. “The right attitude can take you far.”

Brown also noted that defining success is the first step toward achieving success in the Air Force.

“You don’t want to take short-term satisfaction at the expense of your long-term goals. So, it’s important to think about what it really is …what you want to do in the Air Force and map those things out. Then spend some time asking questions about that…ask as many people as you can to get as much information as you can so you can define what success is…to understand that path and not take shortcuts. Once you reach one goal, start on the next goal to drive yourself.”

“I’m proud to welcome Gen. Brown.  Today, our cadets gained additional knowledge and expertise beyond their core curriculum which will allow each of them to further excel as leaders both now and in the future. I am confident that the lessons learned today will remain with the cadets long into their active-duty career.”

For the cadets in attendance, the engagement offered the unique chance to interact with a senior Air Force officer and ask questions about their role in future operations.

“It’s a once-in-a-lifetime opportunity to meet someone of such rank,” said Cadet Ariana Tyler, an ASU student and a junior cadet in the ROTC program. “He is a pilot in the Air Force and that’s what I plan to do. He gave me great advice about how I can better my future in the Air Force as a pilot.”

For more information about joining AFROTC Detachment 019 or for questions about the detachment, please call 334-229-4305.

Gen. CQ Brown, Jr. is the Chief of Staff of the Air Force. As Chief, he serves as the senior uniformed Air Force officer responsible for the organization, training and equipping of 689,000 active-duty, Guard, Reserve and civilian forces serving in the United States and overseas. As a member of the Joint Chiefs of Staff, the general and other service chiefs function as military advisers to the Secretary of Defense, National Security Council and the President.

Brown was commissioned in 1984 as a distinguished graduate of the ROTC program at Texas Tech University. He has served in a variety of positions at the squadron and wing levels, including an assignment to the U.S. Air Force Weapons School as an F-16 Fighting Falcon Instructor. His notable staff tours include Aide-de-Camp to the Chief of Staff of the Air Force; Director, Secretary of the Air Force and Chief of Staff Executive Action Group; and Deputy Commander, U.S. Central Command. He also served as a National Defense Fellow at the Institute for Defense Analyses, Alexandria, Virginia. Gen.

Brown has commanded a fighter squadron, the U.S. Air Force Weapons School, two fighter wings and U.S. Air Forces Central Command. Prior to serving as the Air Force Chief of Staff,  Brown was the commander of Pacific Air Forces, Air Component Commander for U.S. Indo-Pacific Command. Brown is a command pilot with more than 2,900 flying hours, including 130 combat hours. 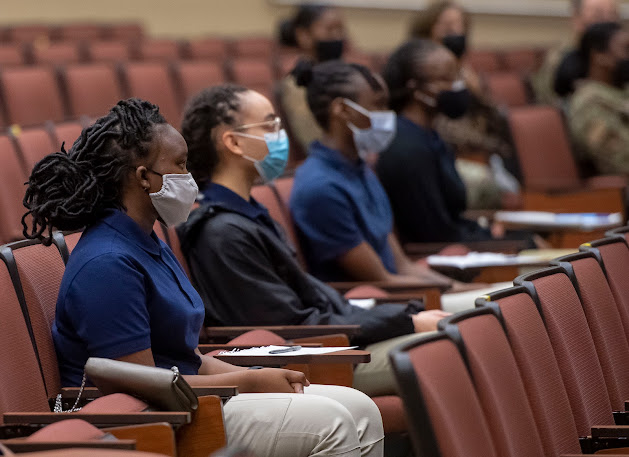