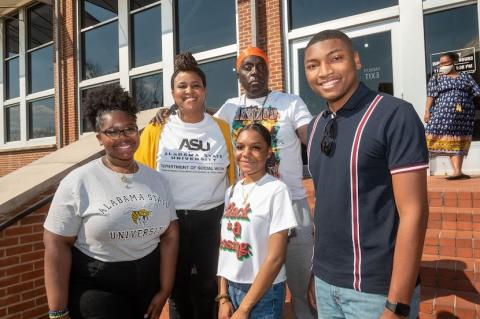 Seventeen family members of Ahmaud Arbery, including his dad Marcus Arbery Sr., made a stop at Alabama State University on Saturday, March 5, to have lunch with ASU students before heading to Selma to commemorate the 57th Anniversary of Bloody Sunday and the 1965 march from Selma to Montgomery.

Arbery was a 25-year-old black man who was chased and murdered on February 23, 2020, by three white men while he was jogging in a neighborhood near Brunswick, Georgia. The three white men were found guilty in state court for shooting and killing Arbery and were later found guilty of federal hate crimes. Arbery’s killing, along with the police shootings of George Floyd and Breonna Taylor, helped to fuel a global movement against racial injustice.

“Our students had the opportunity to sit and talk with different family members. We had a chance to connect with the family. The students discussed social justice, equal rights, voting rights, ASU, the importance of school and more with some of the family,” said  A. Kai Mumpfield, director of Field Education at ASU. “It was a valuable experience.”

Makhayla DesRosiers, president of the student NAACP chapter on campus, described her meeting with the Arbery family as surreal.

“We have seen them on TV and read about them in news articles and seeing them in person humanized them. It took them out of the public spotlight. It was very humbling and gracious,” said DesRosiers, a senior political science major.  “They said they were proud of what the NAACP was doing on campus.”

DesRosiers said she had the opportunity to talk to the family about their travels, the Selma march and their plans for honoring Ahmaud in the future. “I wish we could have spent more time with the family.”

Diane Jackson, the oldest sister of Arbery Sr., said it’s important for the family to continue to raise awareness about police brutality and systemic racism, and when possible, tell people about their journey.

“We were excited to bring some of our experiences to Alabama State and share those experiences with their students. The students treated us like kings and queens. We were able to share things about Ahmaud’s life and achievements.”

Jackson told the story of Ahmaud giving his paycheck every week to her sick dad until he was able to return to work and giving her $20 to put in the church collection plate when he couldn’t attend. “He had a big heart. These are things people didn’t know about him. It’s a hard thing to deal with the loss of Ahmaud.”

The visit was arranged by ASU alumnus Lionel Woodyard (’72), owner of the Atlanta Chauffeur Service, with the help of the nonprofit Transformative Justice Coalition under the direction of the renowned Civil Rights leader Barbara Arnwine.

“Barbara, who embraced the Aubrey family throughout the trial proceedings, collaborated with Vice President Kamala Harris’s office to transport the Arbery family as special guests to the Selma march. So, as an alum, I facilitated the opportunity for them to visit ASU. The family gladly accepted. They understood the importance of the history of ASU in Civil Rights,” Woodyard said.

Woodyard noted that he coordinated the logistics and transportation for the Coalition during its Voter Rights Drive in Georgia, and he was charged with providing that same support for the Arbery family’s Alabama trip.

Mumpfield said the group left ASU with a feeling of belonging. “The family said ASU was family, that they were happy to have ASU support in their journey and that they are looking forward to another visit.  It was important for us to let them know that as they are doing this difficult work…. they will always have a family at ASU.”