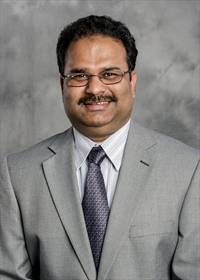 Dr. Mishra received his M.Sc. and Ph.D. degrees from Banaras Hindu University, Varanasi, India. After obtaining his Ph. D., he moved to United States and did his postdoctoral trainings in the Division of Biology, Kansas State University, Manhattan, KS; Division of Allergy and Immunology, Department of Pediatrics, Washington University School of Medicine, St. Louis, MO; and Division of Rheumatology, Department of Pediatrics at Medical College of Wisconsin, Milwaukee, WI.  In the year 2006, he continued at Medical College of Wisconsin and moved in the Division of Allergy and Clinical Immunology within the Department of Pediatrics as a Research Scientist before coming to Alabama State University in February 2009, where he holds an Associate Professor of Biology position in the Department of Biological Sciences. Additionally, Dr. Mishra also serves as the Director for Cancer Biology Research and Training and Freshman Biology Program at ASU. Since February 2011, Dr. Mishra also holds an adjunct Assistant Professor Position in the Division of Molecular and Cellular Pathology within the Department of Pathology, School of Medicine at University of Alabama at Birmingham, AL. Dr. Mishra lab is currently supported by research and educational grants from US Department of Defense, National Institutes of Health and National Science Foundation. In 2013, Dr. Mishra recognized as Top 25 professors at HBCU in USA and also received awards for his research work at ASU.

Project 1- Role of dietary compounds in controlling prostate cancer development and progression: Our current research interest is to understand the molecular mechanism(s) involved during prostate cancer development and clearance in response to a dietary compound, resveratrol (RES). Resveratrol is a polyphenolic compound found in the skin of red fruits, exhibits anti-inflammatory, anti-oxidative, anti-cancer, and anti-proliferative characteristics. RES was first detected in the dried roots of Polygonum cuspidatum, traditionally used in Chinese and Japanese medicines as an anti-inflammatory agent. This project focuses on to explore the role RES on NK cells, macrophages, particularly the tumor-associated macrophages (TAM), and regulatory T cells in tumor microenvironment.

Project 2- Role of immune cells in prostate cancer: Prostate Cancer (PCa) is the most common non-skin malignancy and commonly diagnosed cancer, and second most cancer responsible for death in men in United States. Prior studies in animal models of PCa as well as in human, demonstrated that the prostate produces several growth factors. Addition or blocking of these growth factors can alter the PCa cell proliferation and other important functions. Among these growth factors, transforming growth factor-β1 (TGF-β) plays significant role in tumorigenicity, displays potent immunosuppressive activities, and is required for the conversion of conventional CD4+ T cells to FoxP3+ regulatory T cells (TR). TR that expresses the transcription factor Foxp3 is essential for normal immune function. Absence of TR cells results in multi-organ autoimmunity and death. A clear role of TGF-β and its effect on TR during PCa lacks experimental evidences. In this project, we are investigating the underlying mechanisms involved in the context of TGF-β and/or TR using PCa cell lines, derived from transgenic mouse for prostate cancer (TRAMP), in C57/B6 mice. These cell lines, TRAMP-C1 and TRAMP-C2 form tumors while TRAMP-C3 fails to form tumors. The objective of this project is to define the role of TGF-β production by host cells in response to or TGF-β expression by TRAMP cell lines and to analyze the role of TGF-β on the conversion of naïve CD4+ T cells to Foxp3 expressing TR cells. This project is currently funded by a P20 grant from NCI, NIH. For more information about this project click here.

Project 3- Role of polymeric scaffold in bone tissue regeneration: The natural ECM plays an important role on morphogenesis, tissue development, and angiogenesis since it acts as binding sites for many proteins such as cytokine molecules and growth factors. This project is designed to study the role of multifunctional polymeric scaffolds that mimics the characteristics of natural extracellular matrix (ECM). The goal of this project is to further mimic the natural ECM by understanding the fundamental mechanisms involved in the adsorption and release of therapeutics from polymeric tissue scaffolds. This understanding will aid in the development of new drug eluting tissue scaffolds. This project is currently funded by a research grant from US Deparment of Defense. For more information about this project click here

3. Title: Acquisition of a flow cytometry system to enhance the undergraduate research and STEM education